Friendly and fun-loving, exotic and tropical, cultured and historic, Thailand radiates a golden shade from its glittering temples and tropical beaches to the ever-comforting Thai smile. Adored around the world, Thai cuisine expresses fundamental aspects of Thai culture: it is generous, warm, refreshing and relaxed. Each Thai dish relies on fresh and local ingredients. A varied national menu is built around the four fundamental flavors: spicy, sweet, salty and sour. Nomadic appetites go on eating tours of Bangkok noodle shacks, seafood pavilions in Phuket and Burmese market stalls in Mae Hong Son. Cooking classes reveal the simplicity behind the seemingly complicated dishes and mastering the market is an important survival skill. The celestial world is a close confidant in this Buddhist nation and religious devotion is colorful and ever-present. Shiny temples and golden Buddhas frame both the rural and modern landscape. Visitors can join in on the conversation through meditation retreats in Chiang Mai, religious festivals in northeastern Thailand, underground cave shrines in Kanchanaburi and hilltop temples in northern Thailand.

What does Thailand bring in mind?

The Grand Palace in Bangkok

If there is one must-see sight that no visit to Bangkok would be complete without, it is the dazzling, spectacular Grand Palace, undoubtedly the city's most famous landmark. Built in 1782, the Grand Palace of Bangkok is a grand old dame indeed that continues to have visitors in wonder with its beautiful architecture and intricate detail, all of which is a proud salute to the creativity and craftsmanship of Thai people. Within its walls were also the Thai war ministry, state departments, and even the mint. 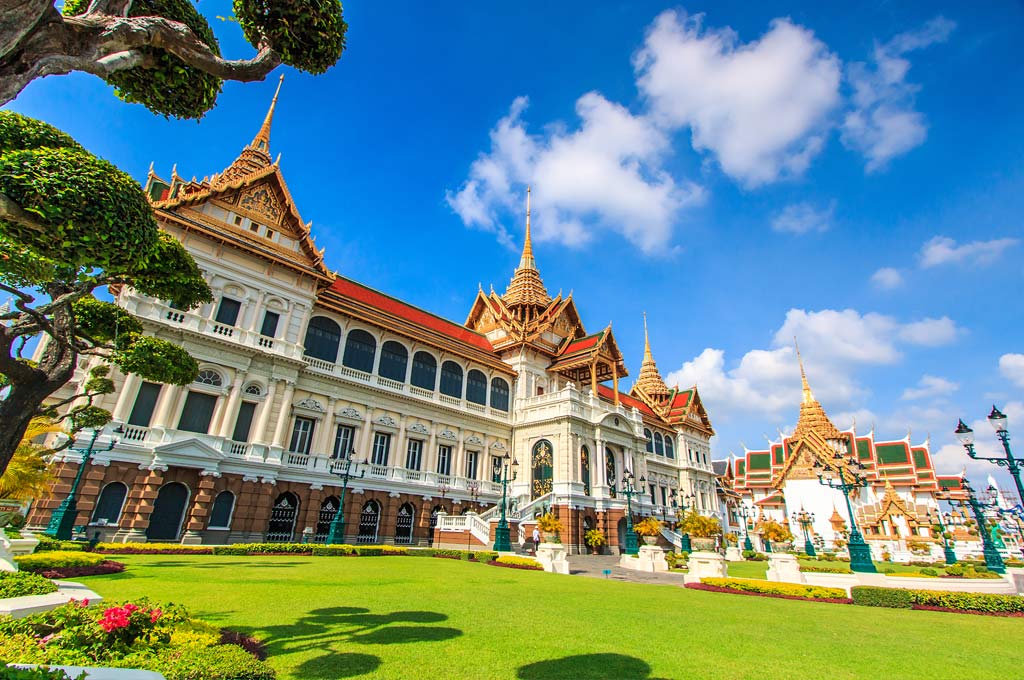 This group of rocks and islands lies 90 minutes by speedboat off the coast of Phang-Nga, or eight or more hours by slow boat from Phuket. The area was declared a marine national park in 1982 and consequently remains largely undeveloped. Derived from the Malay term sembilan, meaning 'nine', Similan refers to the nine main islands in the group. The waters surrounding the Similans are packed with tropical fish, colorful coral, and offer exceptional underwater visibility. As a result, the diving is generally considered to be the best in the region and compares favorably with some of the best in the world. Part of the reason for this is the very interesting submarine topography, due in part to the huge granite boulders which not only litter the shorelines, but also lie in jumbled heaps beneath the waves to depths of 35 meters and beyond. 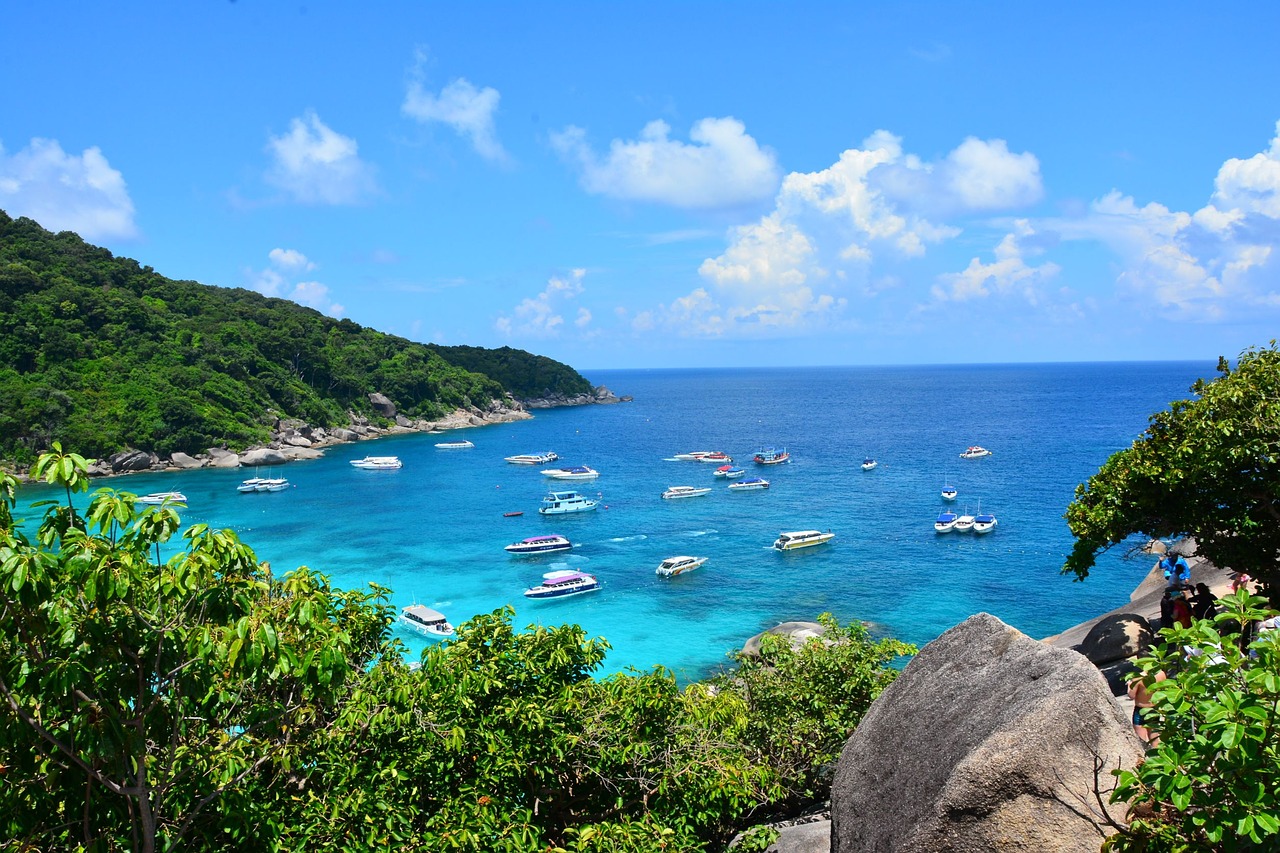 The Phi Phi islands are some of the loveliest in Southeast Asia. Just a 45-minute speedboat jaunt and a 90-minute ferryboat ride from Phuket, these picture postcard islands offer the ultimate tropical getaway. Classic beaches, stunning rock formations, and vivid turquoise waters packed with colorful marine life: it is paradise perfected. There are two islands, Phi Phi Don and Phi Phi Leh. The larger and inhabited, Phi Phi Don attracts hundreds of visitors to stay on its lovely shores. 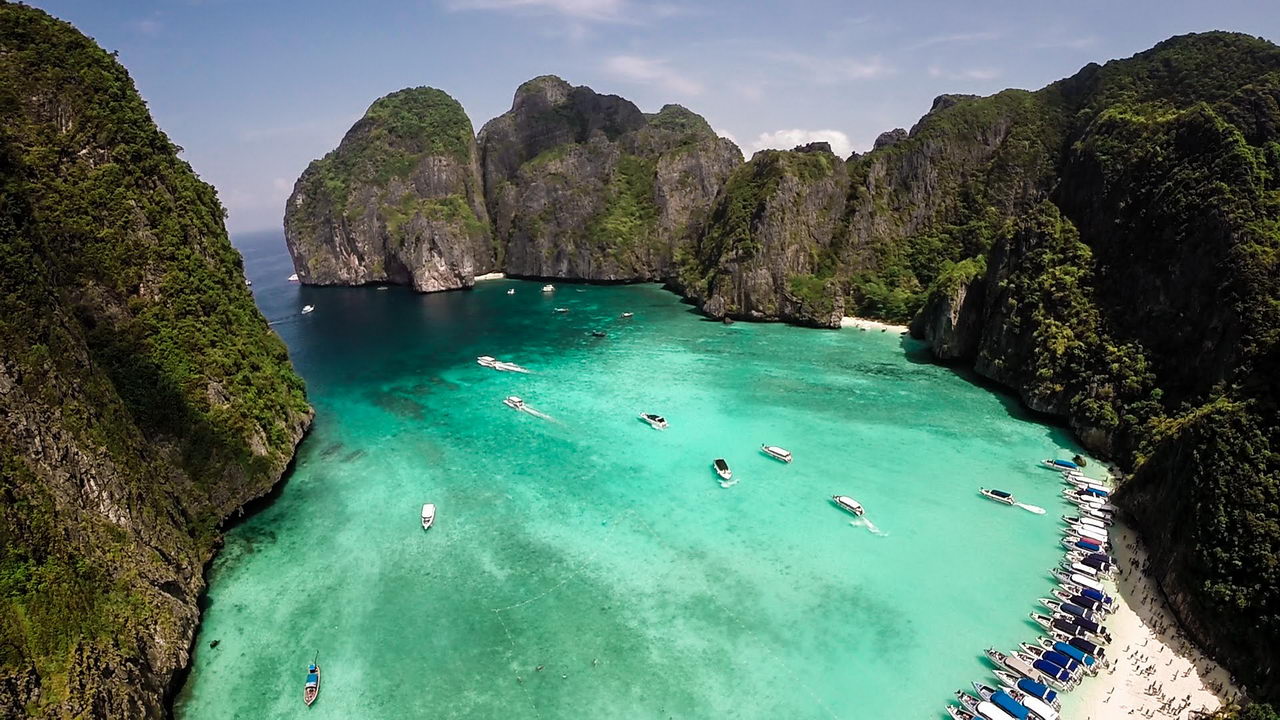 Now on every knowledgeable traveler's list, Railay is nevertheless one of Thailand's most sought-after beach areas. Just south of Ao Nang Beach, around a rocky headland and accessible only by boat, Railay presents a tranquil and extraordinary world. In just one small peninsula, you will find gorgeous white sand beaches, soaring limestone cliffs, viewpoints, caves and a lagoon hidden inside the cliffs, shaped and fed by the changing tides. All within walking distance... At Railay there are no roads; only footpaths. No buses, no cars, just long-tail boats. Although it's actually connected to the mainland, the spectacular Phra Nang Peninsular is effectively cut off from the rest of Krabi by limestone headlands and steep jungle valleys; the only access is by sea. The very picture of tropical paradise, with no roads and no hassle, Railay offers lazy days, adventure forays and chilled-out evenings. 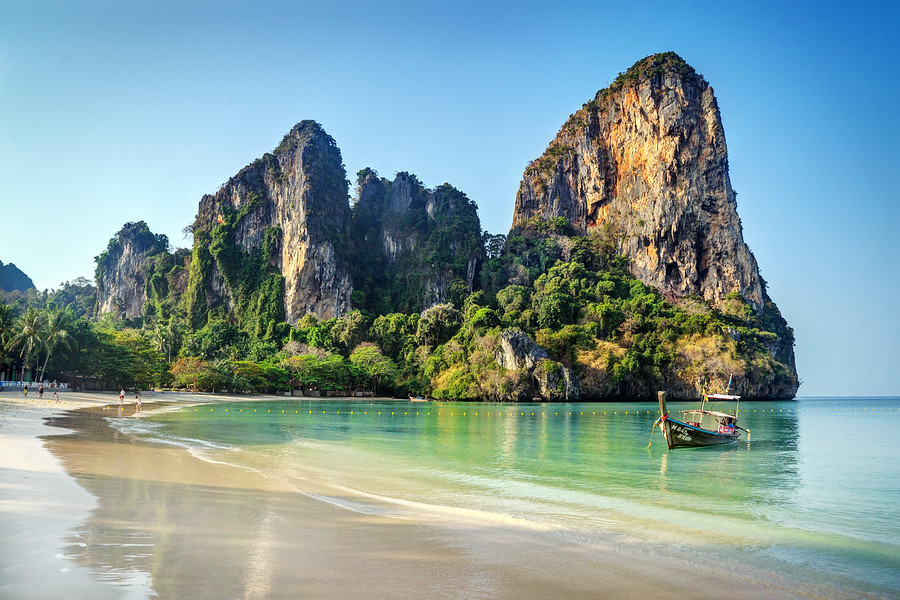 One of the city’s main night-time attractions, especially for families, and is the modern legacy of the original Yunnanese trading caravans that stopped here along the ancient trade route between Simao (in China) and Mawlamyaing (on Myanmar’s Gulf of Martaban coast). Today the night bazaar sells the usual tourist souvenirs, like what you will find at Bangkok’s street markets. Chiang Mai Night Bazaar Building is filled mainly with antique and handicraft stores. Across the street is the Galare Night Bazaar selling up-market clothes and home decor. Behind the collection of shops is the Galare Food Centre. The Anusan Market is less claustrophobic and filled with tables of vendors selling knitted caps, carved soaps and other cottage-industry goods. Deeper into the market is the Anusan Food Centre. 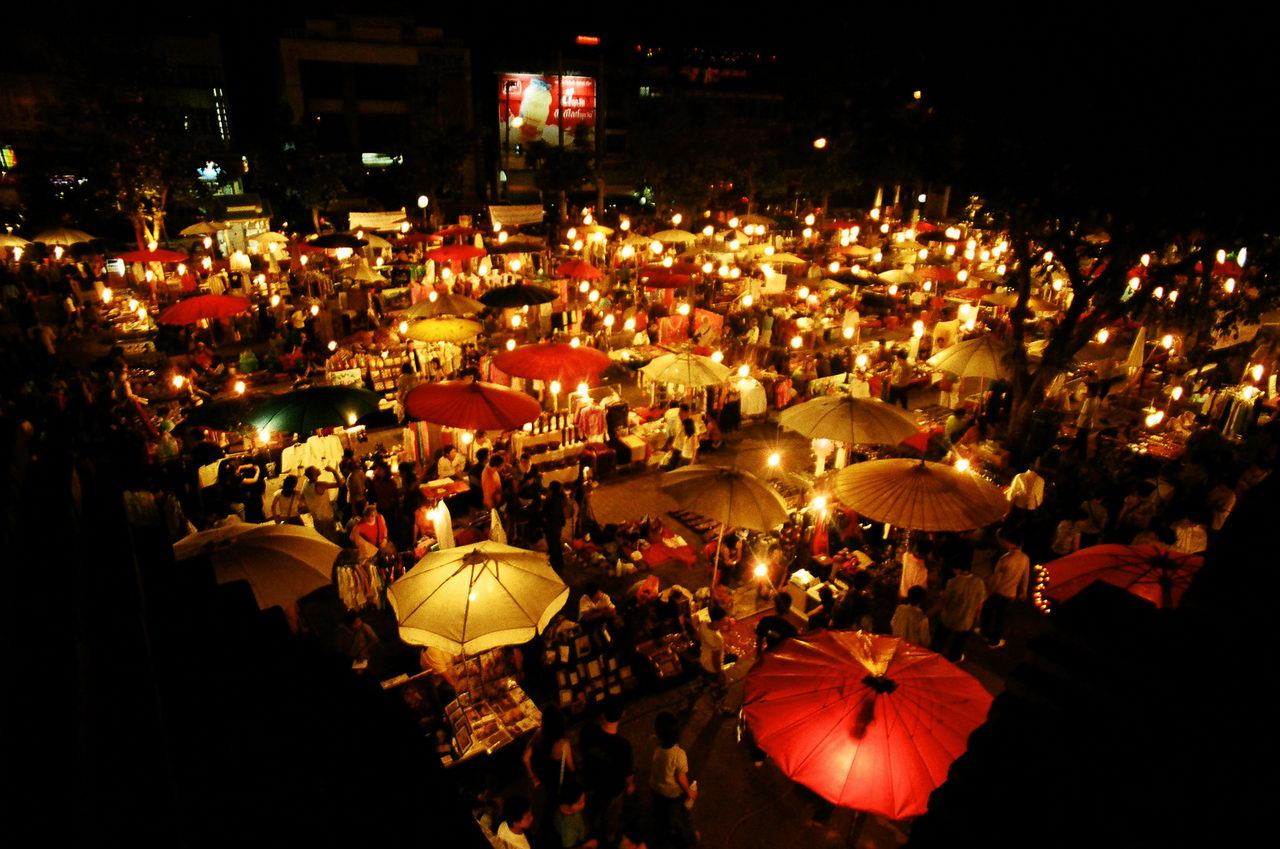 Things you shouldn’t miss in Thailand 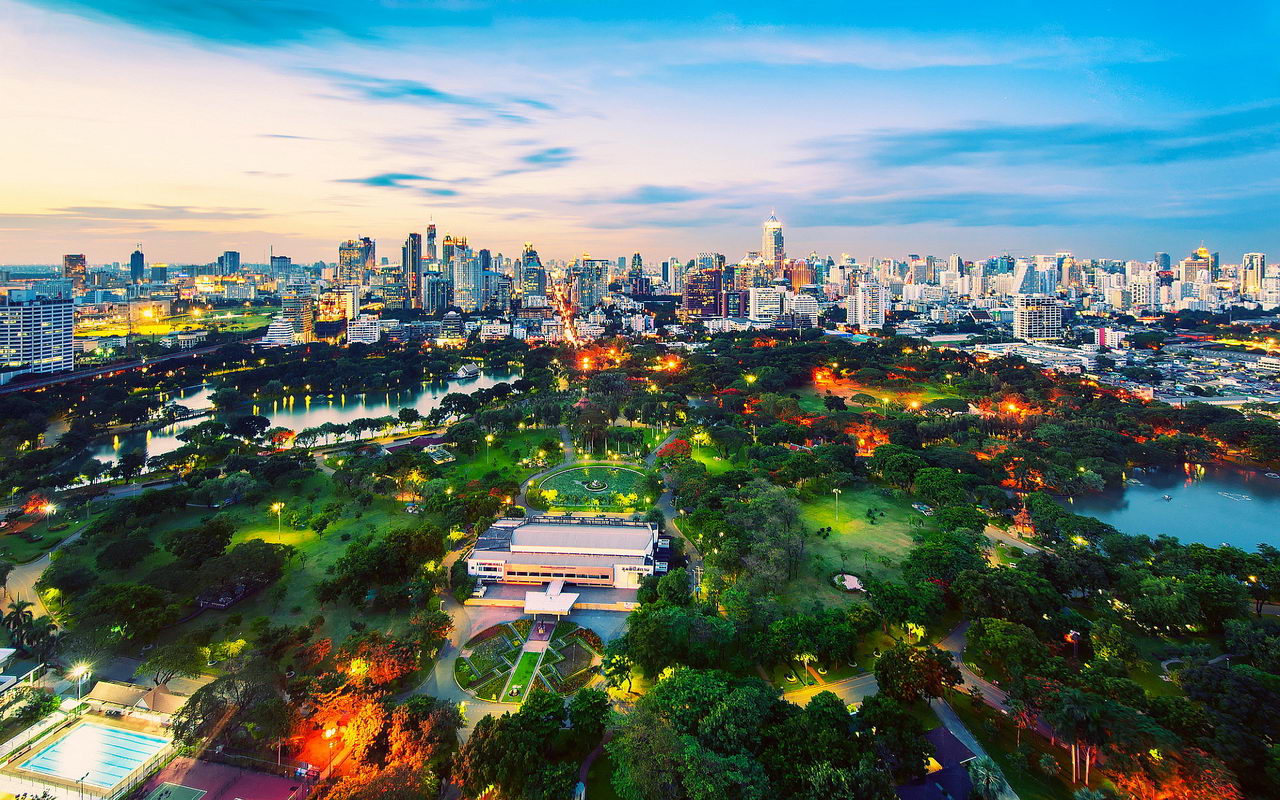 As the political, economic, cultural, gastronomic, and spiritual capital of Thailand, Bangkok features both old-world charm and modern convenience. Invariably, every Thailand holiday includes a visit to the kingdom’s capital city, Bangkok, or Krung Thep, “the city of angels” as it’s known to the locals. Many first-time visitors to the city are overwhelmed by its sheer size; others by the vast number of attractions scattered about the city, the result of more than two centuries of rapid development following the city’s founding in 1782. Today Bangkok is a cosmopolitan, 21st century city of more than ten million inhabitants. 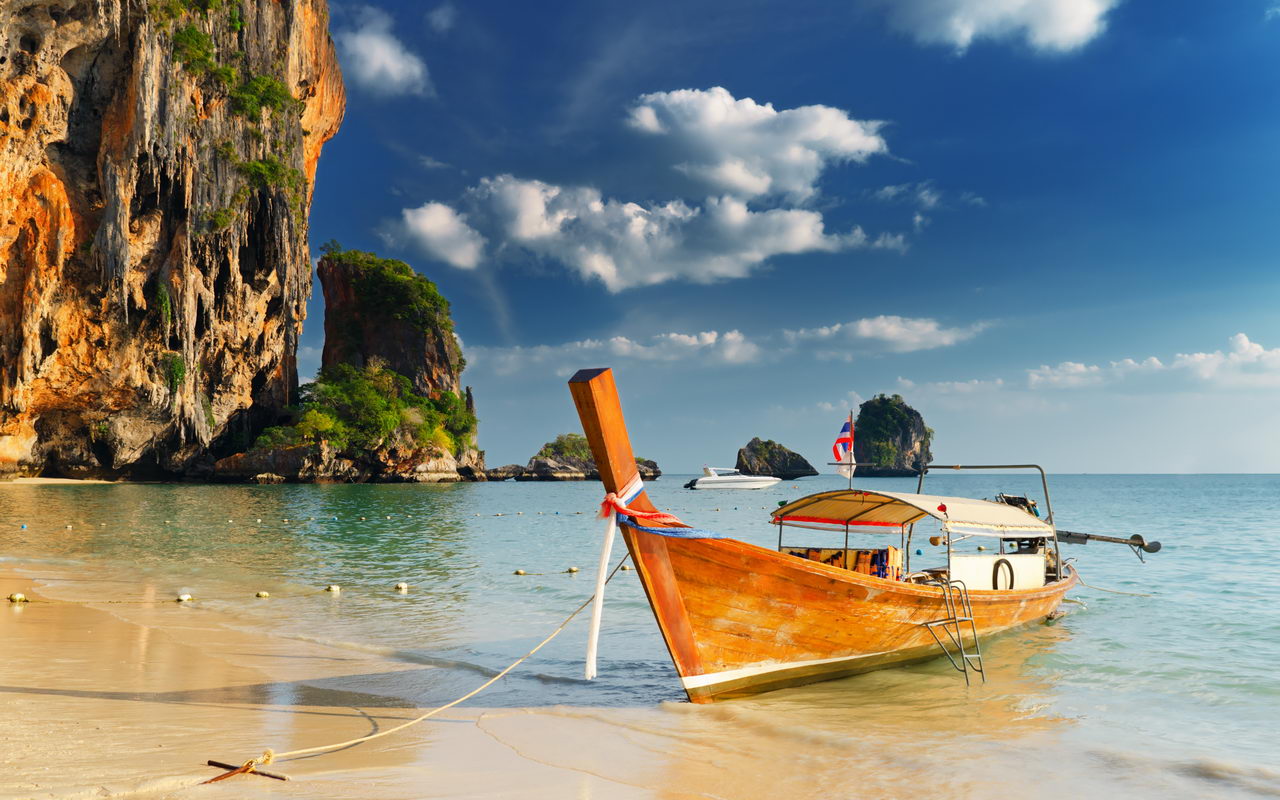 When travelers to Thailand talk about sea, sun and sand, Phuket is often the first place that comes to mind. Catapulted to international attention by the James Bond movie “The Man with the Golden Gun” back in 1974, the entire area today boasts many hotels and resorts, which offer all sorts of tourism facilities for travelers. 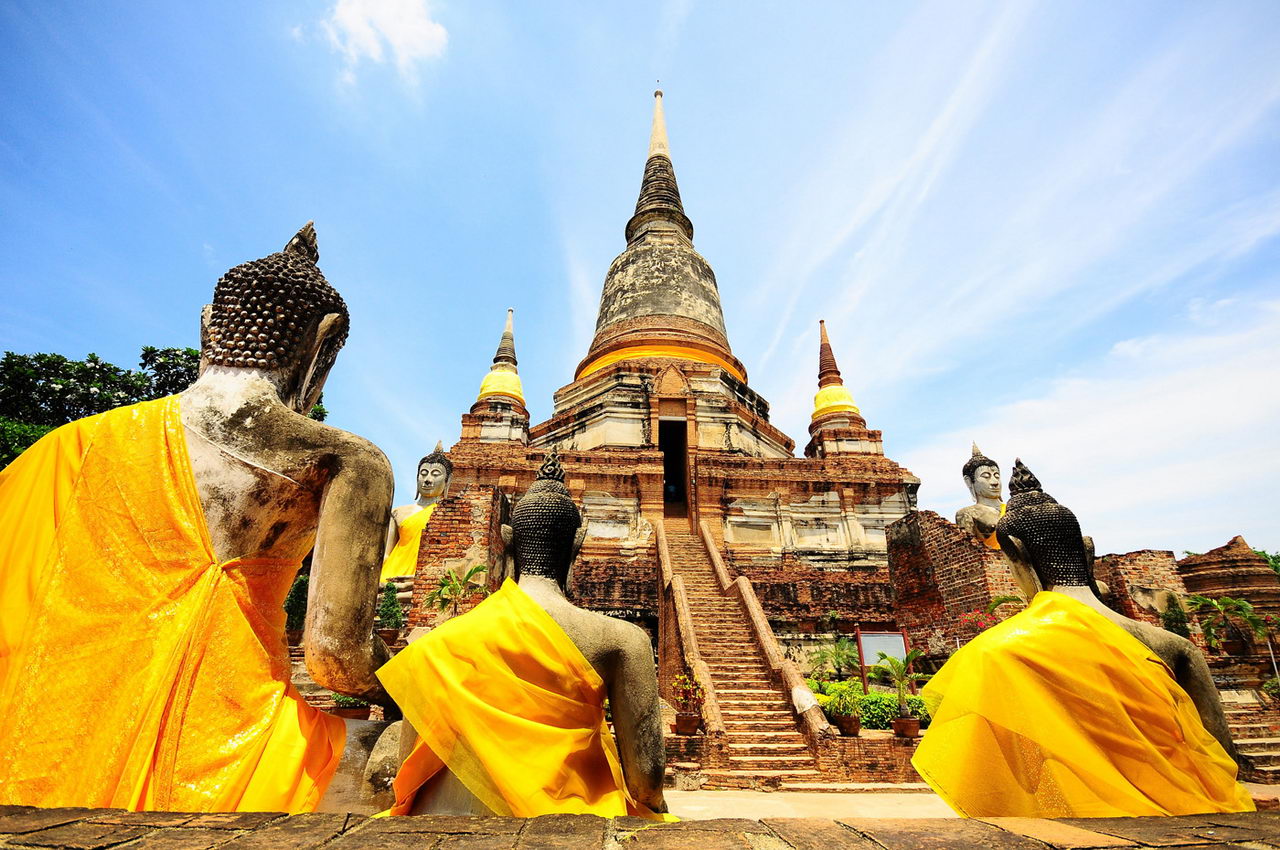 Once considered the most spectacular city on Earth, the ruins of the capital of the Kingdom Ayutthaya are now a major tourist attraction easily accessible from Bangkok by car, train, or boat as either a daytrip or overnight excursion. 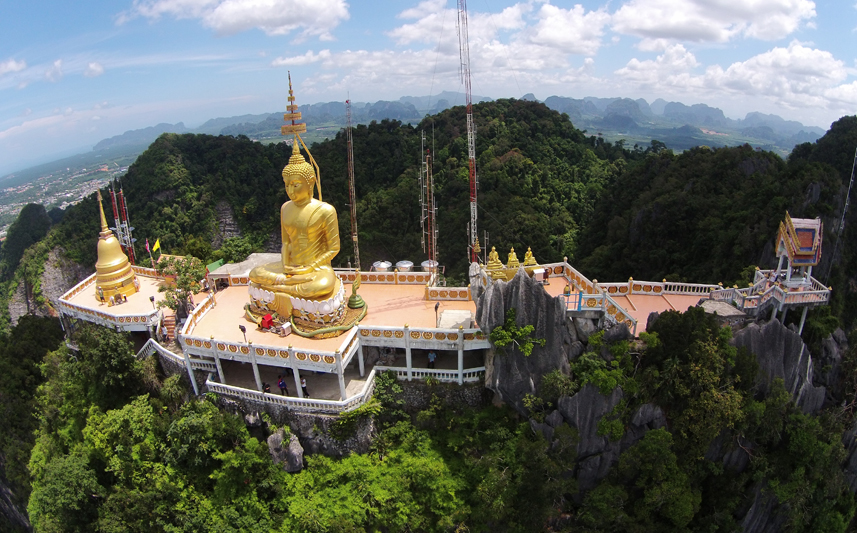 A province on southern Thailand’s Andaman coast is an almost unearthly region of complex archipelagos, where islands seem to erupt vertically out of the sea and secluded beaches are only accessible by colorfully adorned long tail boats. Krabi’s myriad of bays and coves have sheltered pirates, merchants, and sea gypsies for thousands of years and archaeological evidence indicates that Krabi was originally inhabited as early as 25,000 – 35,000 years ago 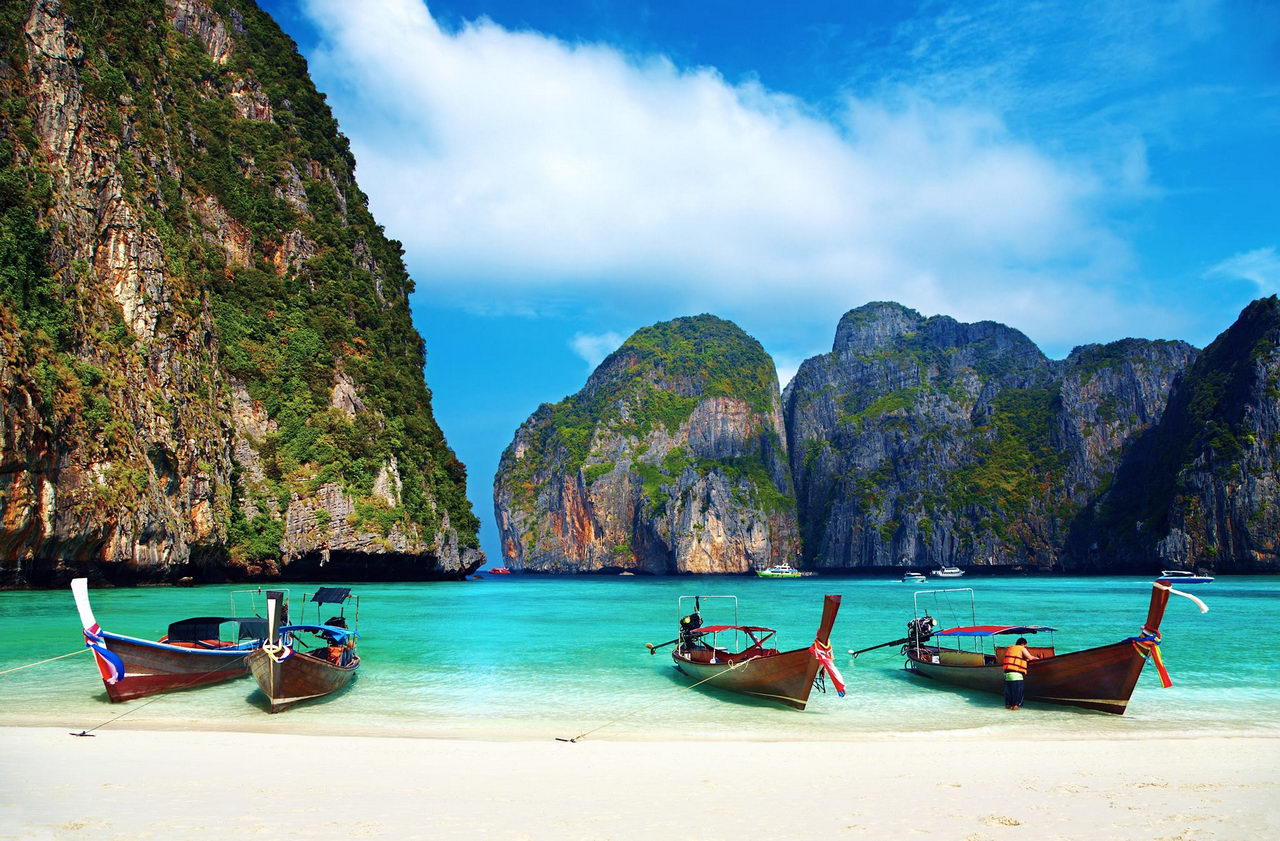 Phi Phi Island is Thailand's island-superstar. It has been in the movies. It is the topic of conversation for travelers all over Thailand. For some, it is the only reason to touchdown in Phuket. Even with all the hype, it doesn't disappoint. Phi Phi's beauty is a large chunk of the allure. The islands, when approached by boat, rise from the sea like a fortress. Sheer cliffs tower overhead then give way to beach-fronted jungle. It's love at first sight. The second part of the why-we-love-this-place story is attitude: few places on the planet are this laid-back. Of the two islands, one is completely free of human inhabitants (Phi Phi Leh), and the other is without roads (Phi Phi Don). There's no schedule, no hustle-and-bustle, no reason to be in a hurry. 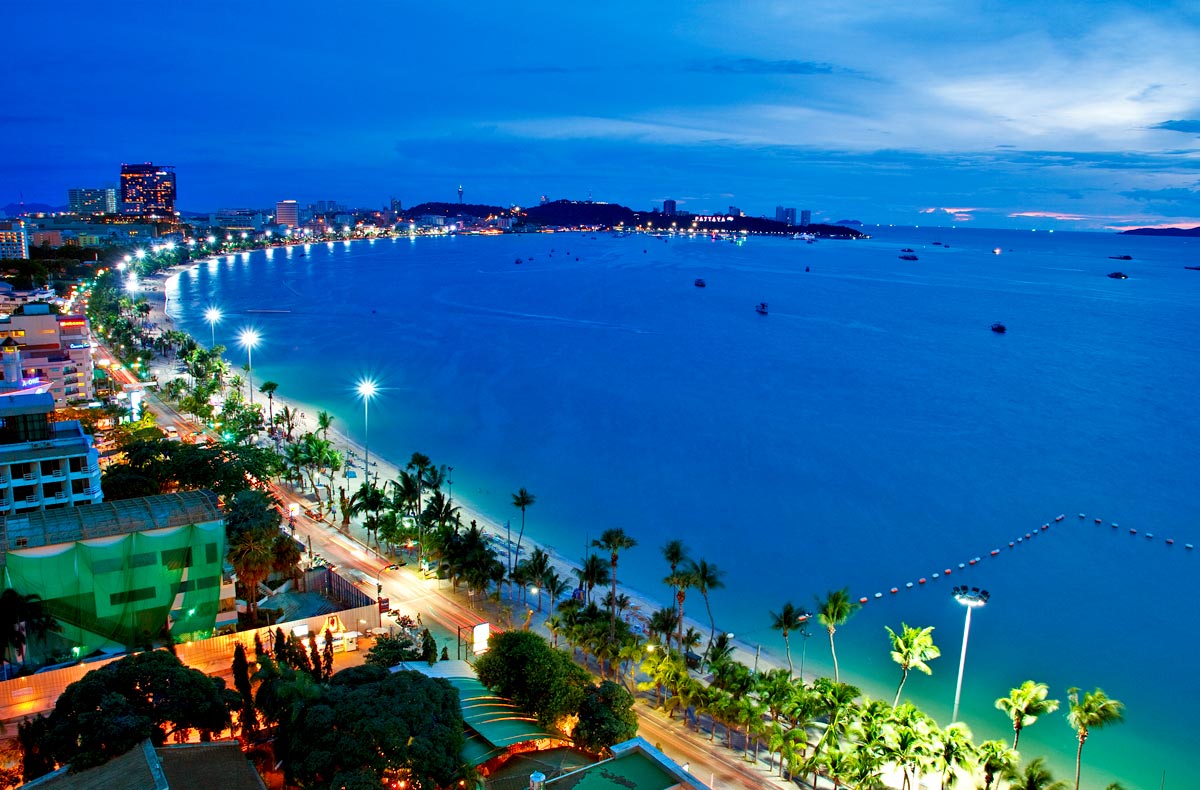 Go-go clubs, massage parlors and girlie bars occupy block after block of the central city of Pattaya, making Bangkok’s red-light districts look small and provincial: Pattaya today is a schizophrenic experience. During the day, the city is slightly less seedy as the beach gets crowded out and jet skis and speed boats bounce across the waves. A fair few Thais have adopted Pattaya as a weekend getaway, drawn by the excellent seafood and lower prices than elsewhere on the eastern seaboard. 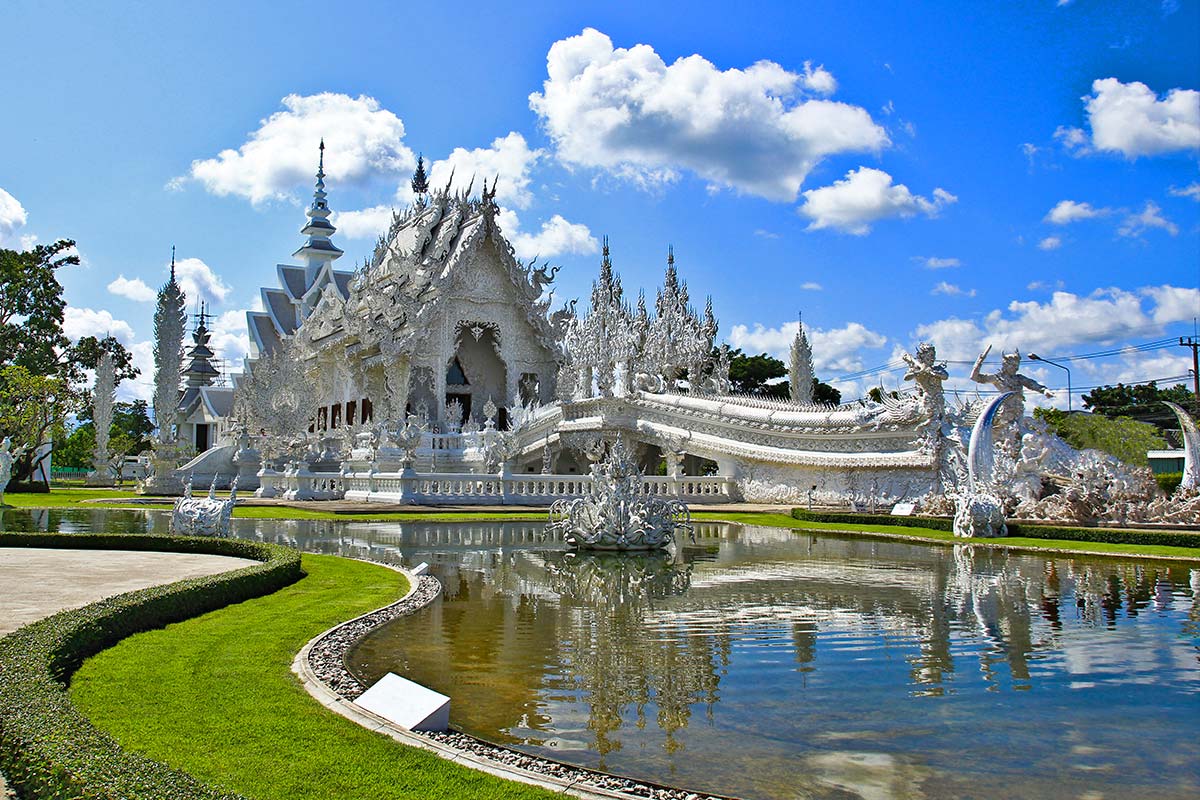 The northernmost city in Thailand, Chiang Rai serves as the main commercial hub of the Golden Triangle, which contains the borders of Thailand, Laos and Myanmar. A busy town offering something for everyone, Chiang Rai is often used as a base for exploring the surrounding region. 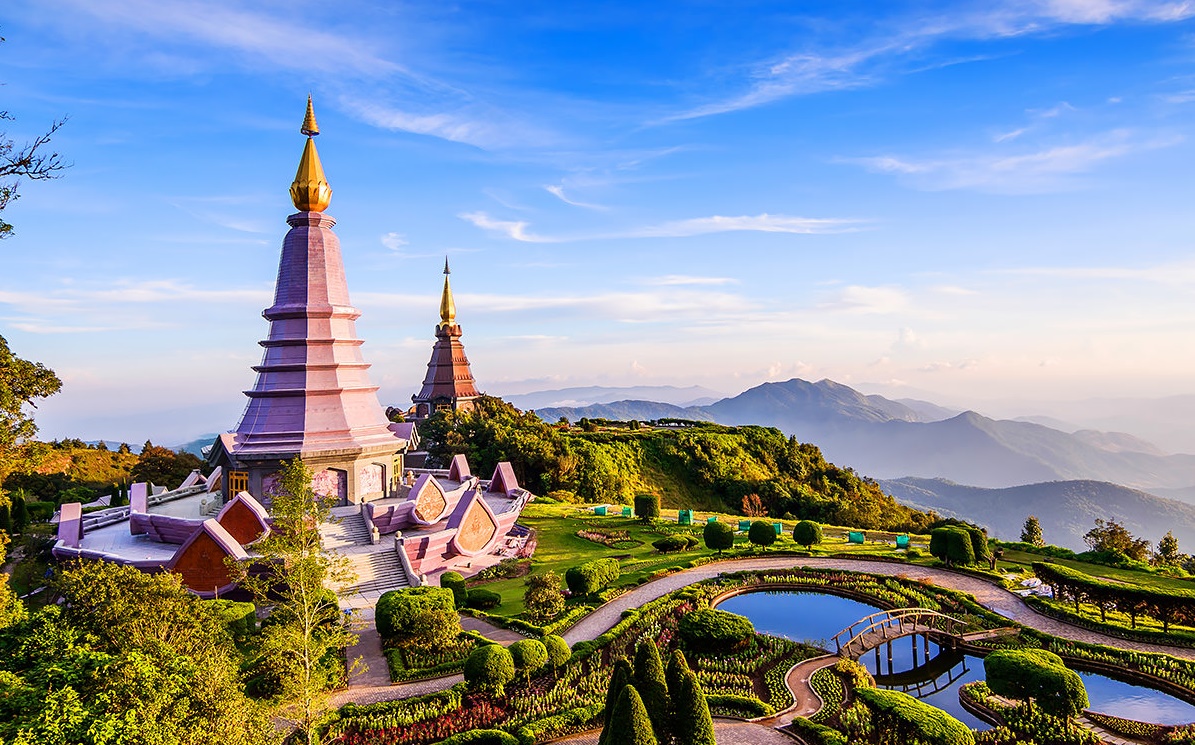 Thailand’s “Rose of the North” contains both cultural and natural diversity, a multitude of attractions, and welcoming hospitality. Chiang Mai literally means “new city” and has retained the name despite celebrating its 700th anniversary in 1996. Chiang Mai is also the center of Buddhism in northern Thailand.

Entering this website you automatically agree the following terms and conditions even if You are not a registered user of the site. Images shown on the website, country and travel specifications, as well as the webdesignes are subject to copyright protection, Elegant Enterprises are All rights reserved. Prohibited the website all or partial copy, store, use, distribution and sale, without the written consent of the copyright owner of this website (Elegant Enterprises)